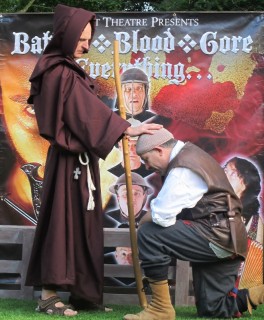 Having written 7 original plays for the young cast at Direct Theatre School, Peter Courtenay has now co-written his first new play for an all adult cast. In the finest tradition of Direct Theatre’s other original work, Agincourt has it’s own distinctive style that makes it both fun and accessible.

“Showing meticulous respect for the historical facts…Agincourt is a very funny, affecting piece, well written and admirably performed” Scene One

Keep your longbows ready and broad swords sharp as you enter into an extraordinary medieval adventure… ‘Agincourt’ is a dynamic, high energy two man show with an eclectic mix of theatrical styles, storytelling and music. Comedy and tragedy collide with larger than life historical characters and fascinating facts, in a fast paced story. Prepare to be whisked into an almost lethal cocktail of modern parodies in a gritty medieval world!